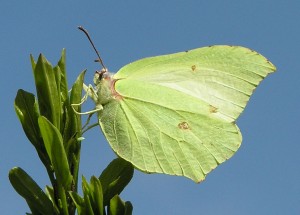 The rains had eased and on a sunny morning our group of volunteers were tidying up south of Ashlawn Bridge.

Someone was heard to shout of Brimstone, we all looked up and above us a yellow-green butterfly was flying on the grassy west bank.  Those working nearer the bridge were looking the other way and pointing. They had spotted a second one. Both of these were the brighter yellow male, but later in the morning a paler female came and settled in the grass nearby. It was shivering to try to warm up its flight muscles.

A Honey Bee was seen shortly afterwards, and a Buzzard flew low overhead giving us good views of the white patches on the underside of the wings, and a flock of Redwing flew by.

A dog walker reported that earlier in the morning they had seen a pair of Kingfisher in the small wet area by the path.